We are a dynamic group of artists, healthcare professionals, academics and advocates engaging in creative projects with older adults aiming to change the way we view and experience aging in our community.

The Imagination Network was founded on the belief that—no matter our age—we can continue to contribute to our community.  As we adapt to the conditions of aging, to cognitive, social or physical challenges, our communities need to adapt with us.  The Imagination Network amplifies the voices of older citizens through cultural creation, public engagement, academic research and civic discourse to foster meaningful connections across sectors and transform how our society responds to aging, older age and dementia.

In 2015, Bruce Devereux of Good Samaritan Christenson Village, a 140-person care home in Gibsons BC, reached out to Chad Hershler of Deer Crossing the Art Farm, a community-engaged arts organization in Langdale, to share over 100 stories he had co-written with residents living with late stage dementia using Timeslips – a story creation process that replaces the pressure to remember with the freedom to imagine. Bruce wanted more people to see,  hear and appreciate these stories; to recognize the vitality, creativity and wit that his residents had to share with their community.  One look at the stories and Chad was hooked. These short compelling stories, co-written by some of the most marginalized voices in our community, were at times abstract and funny, at others poignant and profound.

Their shared wonder and admiration for this work led them to conceive of a cross-sector collaboration – The Imagination Network. Over the next couple of years, they facilitated two successful creative engagement projects inspired by the stories written by these residents: The Sunshine Coast Art Crawl at Christenson Village and a Pop Up Art Studio. The public’s response was overwhelming. There was clearly a need for more of this work in the community.

In 2017, a research team from Douglas College Therapeutic Recreation Department, led by Dr. Colleen Reid, joined the partnership. The Imagination Network expanded its focus to incorporate a Community Based Participatory Research approach, launching Raising the Curtain, a multi-year project that explores the question “What is the lived experience of dementia?” through the ideas, creativity and perspectives of those living it.

The Imagination Network is nascent, iterative and always evolving. We don’t present ourselves as “experts” or “providers”.  We know that there are older adults in our communities dealing with age-related conditions of cognitive and mobility impairment whose voices are currently marginalized by the systems that surround them. Together we are co-creators, co-researchers, co-educators, co-artists, co-healthcare providers, and co-advocates with older adults and their care partners as we explore ways to understand, adapt and change this. Creative engagement, the world of the imagination, is where we do this.

With The Imagination Network we are constantly striving to blend and integrate the principles of community-engaged arts and community-based participatory research.

The principles that guide our work are:

The Imagination Network is in the early stages of setting up a Community of Practice to connect with others who share an interest in creative engagement and a similar vision of changing the way we view and experience aging and the lived experience of dementia in our community.  We are interested in connecting with people across all sectors – dementia advocates, artists, healthcare professionals, educators, policy makers, other community members – whether you are someone who is interested in knowing more about our work, interested in engaging in similar work, or already working in this area.

We are initially exploring setting up a network bringing together a group of people from across British Columbia, Canada.  Please email us at contact@imaginationnetwork.org if you would like to know more about this network.

The Imagination Network is a partnership between healthcare professionals, artists, and academia. 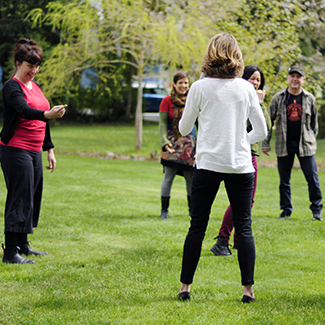 Founded on five acres of traditional Squamish territory just north of Gibsons BC, Deer Crossing The Art Farm is a registered non-profit organization of creative community builders. We believe that creative engagement outside traditional art spaces—on farms or in forests, in hospitals and homes—and across traditional boundaries—between one discipline and another, between audience and artist, between arts and the environment—fosters a stronger sense of belonging for all involved. The more people feel they belong, the more they invest in their community. This is what we mean by creative community building. We build community creatively by building creative communities.

Douglas College is a post-secondary institution that has major campuses in New Westminster and Coquitlam, BC. The Therapeutic Recreation program provides opportunities for students to learn how to use leisure activities – such as arts and crafts, dance, music, sports, games, aquatics and group outings – to improve the health, well being and quality of life for seniors, people living with disabilities or illnesses, and other community members. Two goals of the program are to provide curriculum that is evidence based and to engage in scholarly activity and research with community partners. Students who complete the degree are eligible to become a Certified Therapeutic Recreation Specialist (CTRS).

Christenson Village is a multilevel Campus of Care located in Gibsons, BC providing residential living for 140 residents of various abilities. Since opening in 2006 they have prided themselves on becoming an active part of the Sunshine Coast community and facilitator of innovative creative engagement programs. The facility is operated by Good Samaritan Canada, which is committed to providing a quality of care and support that will enable the elderly and the physically and mentally challenged to experience an optimum quality of life. As a leading provider of housing and health care support, The Good Samaritan Society has played a key role in the development of new and innovative programs – programs that have become industry standards throughout Canada.

Like to know more about the Imagination Network and our projects? Subscribe to our newsletter to keep up-to-date on our projects and opportunities to connect with us.